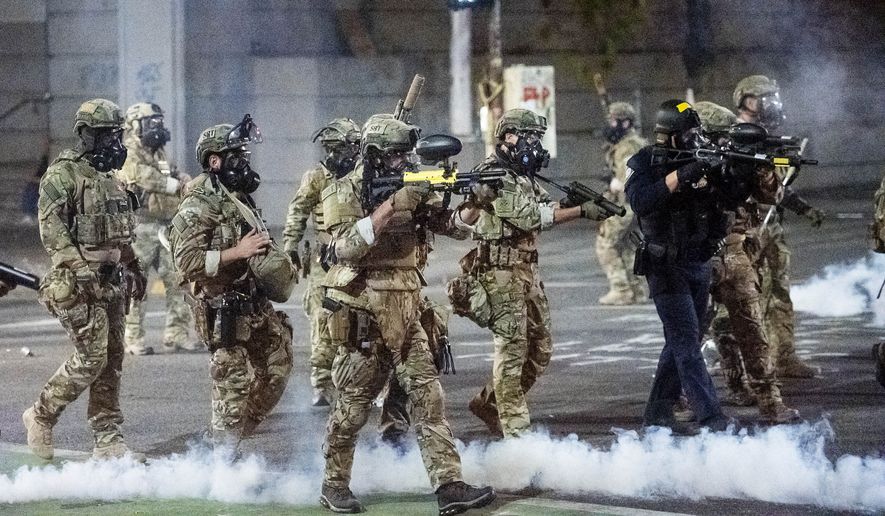 PORTLAND, Ore. — Attorneys for Oregon argued Wednesday for a restraining order against federal agents deployed to quell protests in Portland, in a standoff that some legal experts have warned could lead to a constitutional crisis in an election year.

A federal judge heard the state’s and the U.S. government’s arguments in a lawsuit filed by Oregon Attorney General Ellen Rosenblum, who accuses federal agents of arresting protesters without probable cause, whisking them away in unmarked cars and using excessive force to quell the unrest. Federal authorities have disputed that.

The lawsuit is part of a growing pushback against the Trump administration’s use of federal agents in Portland and its plans to do the same in other cities that is deepening the country’s already considerable political divides. Democratic mayors of 15 cities — including Portland and cities where President Donald Trump has sent or threatened to send federal forces — condemned the use of the agents in a letter to the attorney general.

The hearing Wednesday focused on the actions of more than 100 federal agents responding to protests outside the the city’s Mark O. Hatfield Federal Courthouse, which has been a target for more than 50 nights of demonstrations against racial injustice following the killing of George Floyd at the hands of Minneapolis police.

The motion for a temporary restraining order asks U.S. District Court Judge Michael Mosman to command agents from the Department of Homeland Security, the U.S. Customs and Border Patrol, the Federal Protective Service and the U.S. Marshals Service to immediately stop detaining protesters without probable cause, to identify themselves and their agency before arresting anyone, and to explain why an arrest is taking place.

In this article:Federal, Oregon, Portland, Restraining