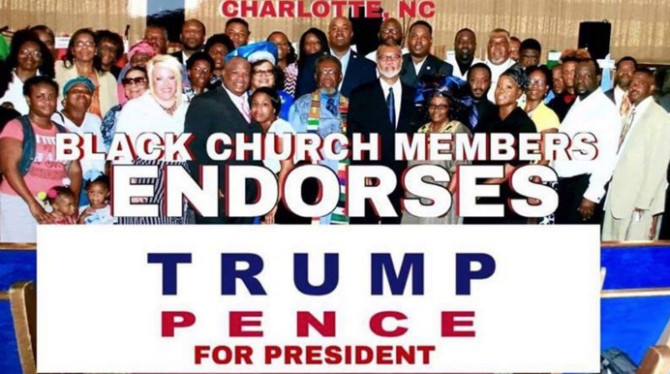 The entire congregation of a historically black church in Charlotte, N.C., supports Donald Trump for president over his Democratic rival, Hillary Clinton.

Representatives of the membership of Antioch Road to Glory International Ministries say that they are endorsing the Republican candidate around the issues of job creation and reform of the criminal justice system.

Katrina Rodgers, daughter of the pastor and founder of Antioch, Thomas Rodgers Sr., cited the 1994 “three strikes” crime bill as the primary reason that they are not behind Clinton. The crime bill has indisputably led to the mass incarceration of African-Americans, something Hillary Clinton has admitted to. “We want to break away from more of the same,” says Rodgers.

Her father was more blunt in his assessment: “I think that she is very dangerous and reckless and her past track record is a great indication that she is not fit to lead this country—or any other country,” he said to CNN.

A recent Facebook post likened the former Secretary of State to being in a violent relationship: “Supporting Hillary is like being with an abusive ex, one that has left you wounded and broken. It’s time to give the new guy a chance.” But before you label these folks a band of kooks (they say they know they are out of step with most African Americans on this one), the church’s Facebook page gives some more perspective on their reasoning.

One recent post shows shows an enslaved couple in front of a cotton field who “vote Dixiecrat,” and the photo under depicts a photo of Malcolm X, saying, “A Dixiecrat is nothing but a Democrat in disguise.”

“This is what we feel in our hearts of hearts that is right for us to do so we’re moving forward on that,” Rodgers said, reports EUR Web.

Watch Katrina Rodgers and her father, Thomas Rodgers, Sr. explain why they support Trump over Clinton on CNN: