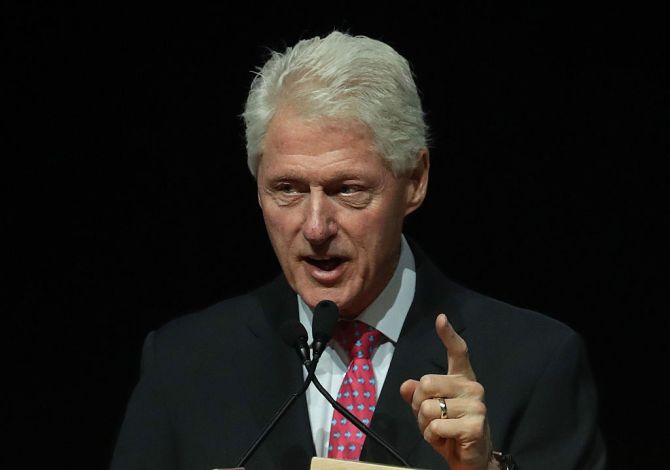 Bill Clinton, acting as a surrogate for his wife’s presidential campaign, told Asian American journalists and voter activists Friday, “You want a president like Hillary Clinton who sees you as part and parcel of the quilt of diversity . . . We should be expanding the definition of ‘us’ and shrinking the definition of ‘them,’ not the other way around . . .

The former president launched a strong defense of Hillary Clinton’s trustworthiness, concluding his talk in Las Vegas saying, “There are people who spent their lifetimes in national security who believe she’s the only person that you can trust.”

David E. Sanger and Maggie Haberman reported Monday for the New York Times, “Fifty of the nation’s most senior Republican national security officials, many of them former top aides or cabinet members for President George W. Bush, have signed a letter declaring that Donald J. Trump ‘lacks the character, values and experience’ to be president and ‘would put at risk our country’s national security and well-being.’ ”

Clinton’s opposite number, representing Trump at the Presidential Election Forum hosted by APIA Vote and the Asian American Journalists Association, was Utah Attorney General Sean Reyes. He acknowledged that he was not initially in favor of Trump, but he shared the candidate’s negative view of the economy, of the United States’ status in the world, and of the prospect of Clinton-nominated Supreme Court justices.

Clinton and Reyes tailored their remarks toward the Asian American audience.

Reyes, whose background is Filipino, Japanese and Hawaiian, said affirmative action should be repealed. Just as opponents say the practice hurts whites, Reyes stood with those who say it also hurts Asian Americans, who are often portrayed as high-achieving despite differences among the various Asian American groups.

Reyes said “UCLA” has come to stand for “Underage Caucasians Lost Among Asians.”

Reyes called “radical Islam” the enemy but quickly added that he was not speaking of law-abiding Muslims. He also said Trump’s policies would favor Asian American small businesses.

Clinton discussed how his wife’s detailed proposals would benefit Asian American students faced with college debt, pledged more aid to the Small Business Administration, recounted a recent trip to Vietnam and touted the number of Asian American appointees in his own administration, includingNorman Mineta, the former Commerce secretary who became the first Asian American Cabinet member. Hillary Clinton also favors granting green cards automatically to anyone seeking a master’s degree or a Ph.D., he said.