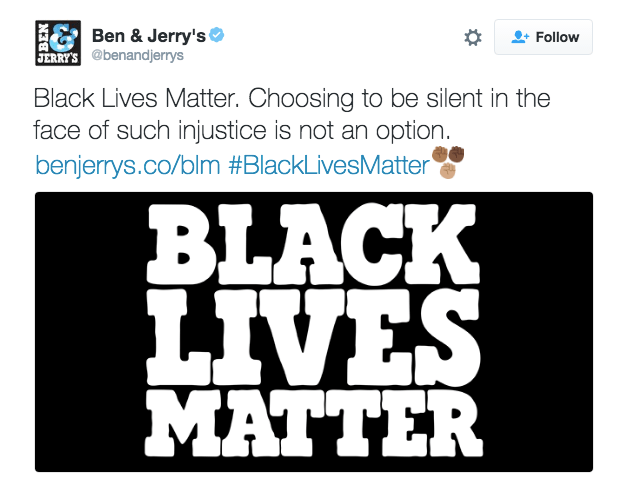 Ben & Jerry’s took to its social media platforms to proclaim that “systemic and institutionalized racism are the defining civil rights and social justice issues of our time,” and being silent about “the violence and threats to the lives and well-being of Black people is to be complicit in that violence and those threats.”

Black Lives Matter. Choosing to be silent in the face of such injustice is not an option. https://t.co/6Vy0KHJeKU #BlackLivesMatter pic.twitter.com/pK96teLRhd

We believe that saying Black lives matter is not to say that the lives of those who serve in the law enforcement community don’t. We respect and value the commitment to our communities that those in law enforcement make, and we respect the value of every one of their lives. But we do believe that—whether Black, brown, white, or blue—our nation and our very way of life is dependent on the principle of all people being served equal justice under the law. And it’s clear, the effects of the criminal justice system are not color blind. All lives do matter. But all lives will not matter until black lives matter.

Of course, the response to the statement was split. Some people praised the company:

Black Lives Matter. Choosing to be silent in the face of such injustice is not an option. https://t.co/6Vy0KHJeKU #BlackLivesMatter pic.twitter.com/pK96teLRhd

@benandjerrys about to try out your ice cream for the first time! #BlackLivesMatter pic.twitter.com/drHwhkeSHg

While others, well, you know:

@benandjerrys BLM is a terrorist organization. Are you coming out with a new #BlackISIS flavor ?

@benandjerrys what injustice, how about all lives matter all this does is fan the flames of hatred

Now I won’t feel so bad about eating a whole pint of Cherry Garcia this week.