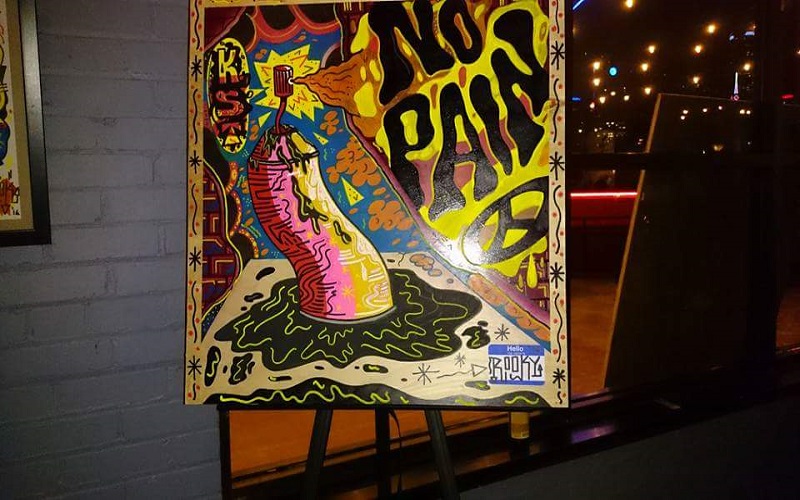 On Saturday, October 1, 2016,  Deanna Cook’s voice was no longer silenced.  Instead, her voice was heard throughout the upstairs ballroom of Gilley’s Dallas as different artist displayed their work at the First Annual Dallas Art in Motion: Violence is Violence event.  Sponsored by The Deanna’s Voice Foundation,  Dallas Art in Motion provided a platform where various artist and entertainers displayed a diverse visual expression against all forms of violence.

With live paintings by artist including Cindy Tobar,  Lance @ OrginalRock, and Invert the World, canvas and photography by Gura Ma, Jasmyn Beasley, Mike Burton, Destiny Grice, and Shelia Tobar, the audience was able to gain both a beautiful appreciation for  the artist as well as for the various aspects of violence their pieces represented.  Gloria “FreeMe” Johnson , Travis Melvin, Jackie Blaylock, MyNameisReallyEarl MasterMime,  Rkive, and  yogis painted by Heber broaden this display by adding powerful words and performances which left the audience with the strength, love and  power that it will take for all communities to combat domestic violence and all ot

her forms of violence  together.

This event was the perfect combination of yoga and art…. Music and spoken word….Pain and Passion…. Fear and Faith…Anger and Forgiveness…Death and Life.  By giving these elements and emotions a platform, the Deanna’s Voice foundation was able to give a voice not only to Deanna Cook but to the survivors in JR Newton’s book Healing Voices,  to Human Trafficking survivor Tonya Strafford as expressed by her testimony,  and to Police brutality and other forms of violence.

UpnUpNews salutes The Deanna’s Voice Foundation for their work and for taking a stand against Domestic Violence and all forms of violence in the DFW metroplex.  Join us by looking at the pictures and videos below from the Dallas Art in Motion event and posting #ViolenceisViolence , #DeannasVoice, #DallasArtInMotion on your social media pages.  Also, do not  forget October  is National Domestic Violence  Awareness Month; . What are you doing to take a stand?

Dallas Art in Motion was such a success. Thank you to everyone that came out and was impacted by the events of the night. A huge thank you to Chestin Jones and NaSasha Shelton for always being a huge help for Deannas Voice events! Thank you to all of the artist who gave their time! Mr. DJ Johnson (invert the world) for flying in from Atlanta to be our featured artist! Gloria FreeMe Johnson the freestyle poet for setting the tone and closing us out. Earl D. Thomas for being so amazingly talented. Johnrice Newton for her presentation. Angella Martin for providing food for the artisit and volunteers. The family place shelter. Tonya Stafford for bravely sharing her story And everyone else that made it a success. Looking forward to next year. Mark your calendar for our next event, POWER5k in March 2017!

Check Out These Videos