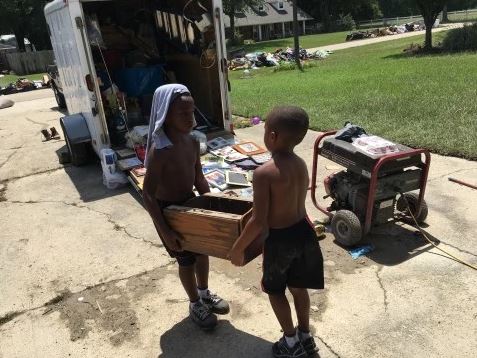 But then a nameless storm brought unprecedented flooding to Baton Rouge and a wide swath of southern Louisiana over the last week. Countless Katrina survivors have been left, for a second time, with nothing.

“Everything was going good,” said Trinice Rose, a nurse who escaped her home near Baton Rouge on foot as the floodwater rose — 11 years to the month after her home in New Orleans’s Ninth Ward was drowned under more than nine feet of water. “Now, again, we’re back where we started.”

Two displacements, two traumas. A loss that has left many feeling tired, battered and hopeless. And even as many face unclear futures and questions about where they will live, experts say they are also concerned about the mental health consequences for Katrina survivors now weathering this new loss.

The historic flooding that is battering Louisiana has left at least 13 dead, state officials said. Another 30,000 people have been rescued and 40,000 homes have been damaged.

An unknown number of people remain missing nearly a week after the rain began to fall. Scores of firefighters, police officers and other first responders fanned out across the region this week to begin a massive search-and-rescue mission that authorities said could last for up to two weeks.

“Nobody has been forgotten,” Louisiana Gov. John Bel Edwards (D) said at a briefing this week. “We understand there are a lot of people who are suffering.”

Homeland Security Secretary Jeh Johnson will visit Louisiana on Thursday to review the response and address reporters, a spokeswoman for the department said.

Many in the flooded area and across the country have questioned why this devastation — which the American Red Cross called the country’s worst natural disaster since Hurricane Sandy in 2012 — has not received more attention from national media outlets, politicians and government officials.

In an editorial published Wednesday night, the Advocate newspaper in Baton Rouge called on President Obama — who is vacationing in Martha’s Vineyard, Mass. — to visit the shaken region.

“We’ve seen this story before in Louisiana, and we don’t deserve a sequel,” the editorial stated. “In 2005, a fly-over by a vacationing President George W. Bush became a symbol of official neglect for the victims of Hurricane Katrina. The current president was among those making political hay out of Bush’s aloofness. … It’s past time for the president to pay a personal visit, showing his solidarity with suffering Americans.”

Obama declared the flooding a major disaster on Sunday, opening up federal funding for 20 parishes, and the White House said he has been receiving regular updates since this weekend.