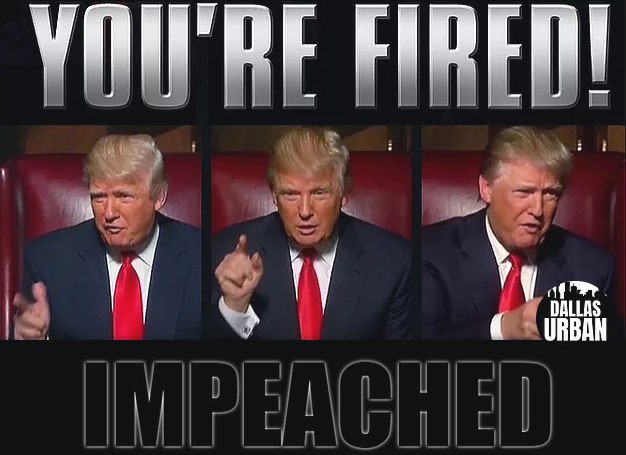 Donald Trump became only the third president in U.S. history to be impeached when the House on Wednesday approved an article accusing him of abuse of power.

House Speaker Nancy Pelosi was about to announce the historic and mostly party-line vote, setting up a Senate trial in January.

The House was voting on a second article Democrats have proposed accusing him of obstruction of Congress.

The House action came as Trump was speaking at campaign rally in Michigan.

The House was voting on a second article Democrats have proposed accusing him of obstruction of Congress.

The House action came as Trump was speaking at campaign rally in Michigan.

House lawmakers voted to impeach President Trump on Wednesday in only the third such rebuke in American history.

The move triggers a trial for Trump in the Senate, expected in January — one in which majority Republicans are likely to permit him to retain his office.

The vote was largely along party lines. Every Republican opposed impeachment.

The sole independent in the House, Michigan Rep. Justin Amash, voted with Democrats.

Hawaii Democratic Rep. Tulsi Gabbard, who is running for president, voted present on both articles: “I am standing in the center,” she said in a statement.

History months in the making

The House vote follows months of talk by Democrats about impeaching Trump and investigations that deepened profound political division across the country.

Impeachment discussions accelerated in September after the discovery that the president wanted Ukraine to conduct investigations that could help him in the 2020 election.

The White House froze some $391 million in military aide for Ukraine for a time this year but ultimately released it; Ukraine’s leaders never agreed to launch investigations that Trump wanted into the 2016 election and the family of former Vice President Joe Biden.

For Trump and Republicans, what they called the absence of any real exchange meant there was no crime. In fact, they have argued, the president was doing his duty to investigate what they called “corruption” in a nation long troubled by it.

For Democrats, led by House Speaker Nancy Pelosi, Trump was caught red-handed in the middle of a shakedown, conditioning dollars appropriated by Congress and his own official acts — an Oval Office meeting — on political favors.

In a nation deeply hardened into rival partisan tribes, impeachment hasn’t appeared to move the needle with many Americans.

And the tumultuous frenzy of political life in the Trump era means that it isn’t clear how much the events of late 2019 and early 2020 might resonate with voters by the time they cast ballots in the presidential election on Nov. 3.

But the pending election figured prominently in all sides’ commentary about whether and how the House should take up impeachment, a question that also fractured Democrats after they gained a majority in the 2018 midterm elections.

Related Topics:Donald TrumpImpeachedNational
Up Next