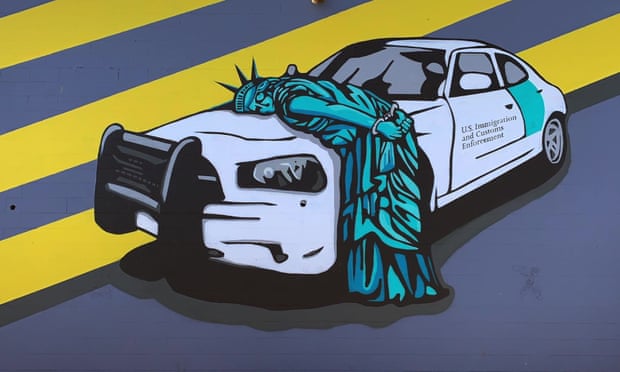 A mural of the Statue of Liberty, handcuffed and slammed on the hood of a police cruiser, is drawing attention in downtown Las Vegas, a day after a top Trump administration official in charge of immigration suggested the statue’s famous inscription be amended to include a test of means.

Under the pseudonym Recycled Propaganda, artist and British immigrant Izaac Zevalking painted the image on a wall late last month, before citizenship and immigration services director Ken Cuccinelli – jokingly – suggested amending Emma Lazarus’s sonnet inscribed on the statue to read: “Give me your tired and your poor who can stand on their own two feet and who will not become a public charge.”

Zevalking told Las Vegas station KTNV: “My purpose of doing what I did with the Statue of Liberty is to try and draw analogies with America’s past and how it was founded and how it was largely built by immigrants, to really make an analogy out of that so that people can apply that to contemporary society and contemporary issues a little bit more.”

Since Cuccinelli made his suggestion to NPR, administration officials have sought to play down its significance.

The White House adviser Stephen Miller said he wouldn’t “get off into a whole thing about history here”. But he added: “The Statue of Liberty is a symbol of American liberty lighting the world. The poem that you’re referring to was added later and is not actually part of the original Statue of Liberty.”

Still, the exchange underscores the change last week in administration policy toward immigrants applying for permanent residency status or green card. Under the new rules, immigration services will be able to reject applicants who have spent more than a year on food stamps, Medicaid or other public benefits.

Asked which immigrants will now be welcome to the US, Cuccinelli said: “All immigrants who can stand on their own two feet, self-sufficient, pull themselves up by their boot straps – as in the American tradition.”