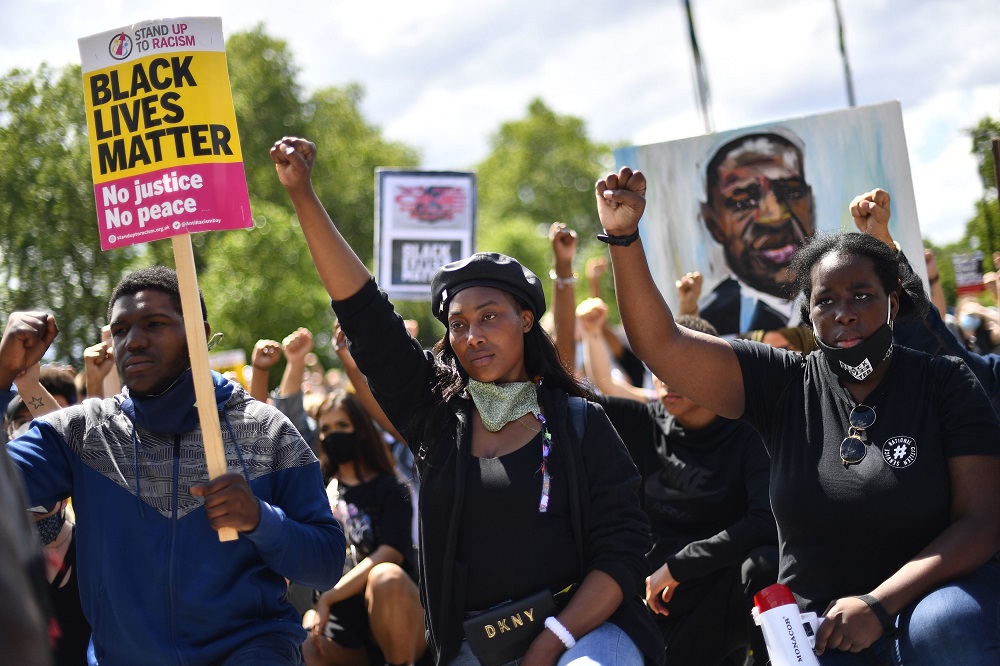 FILE - In this June 13, 2020 file photo, activist Sasha Johnson, centre, attends a protest at Hyde Park in London. An activist who has played a leading role in antiracism demonstrations in Britain is in critical condition after being shot in London, her political party says. The Taking the Initiative Party says Sasha Johnson was shot in the head on Sunday, May 23, 2021. (Victoria Jones/PA via AP, File)

The Black Lives Matter activist Sasha Johnson was shot in the head after four men forced their way into a party she was attending and a scuffle broke out, police have said.

The latest details from the Metropolitan police came as they try to quell speculation that the shooting was targeted.

Officers believe Johnson, who came to prominence last year as protests for racial justice sprang up across Britain, was probably an unintended victim, and the shooting was not linked to her activism.

Police say one man believed to be in his 20s suffered a superficial knife injury during the incident on Sunday at around 3am in Peckham, south-east London.

“We know there was an organised party taking place in the back garden of an address in Consort Road. Sasha was among around 30 guests at the party.

“Shortly before 3am, four black males wearing dark clothing have gained entry into the garden through a side entrance and in the ensuing melee a firearm has been discharged, injuring Sasha. The suspects have then fled the garden.

“Our work is ongoing to establish the motive for this attack but I want to reiterate that nothing has been brought to our attention that suggests Sasha was targeted. I would urge anyone who can help our investigation to get in touch so we can ensure these dangerous individuals are identified and arrested.”

Johnson, 27, a mother of three children, was struck by a single bullet. Police said on Tuesday they were unaware of any death threats Johnson may have received before the shooting.

Commander Alison Heydari, of the Met, said: “This was a shocking incident that has left a young woman with very serious injuries. Our thoughts are with the family of Sasha Johnson who are being supported by specially trained officers.”

After the shooting BLM said Johnson had been the target of death threats. Heydari said: “We are aware of Sasha’s involvement in the Black Lives Matter movement in the UK and I understand the concern this will cause to some communities – however, I wish to stress that at this time there is nothing to suggest Sasha was the victim of a targeted attack. We are also not aware of any reports of threats made against her prior to this incident.”

Forensic experts have been combing the Consort Road area looking for evidence. Police have also been securing CCTV from the area, as well as footage from devices that may have recorded people in and around the home where the gathering was taking place. Detectives have also been interviewing those at the party.

Johnson, a graduate of Ruskin College, in Oxford, was a leading figure in last summer’s anti-racism protests and is a prominent member of the Taking the Initiative party, which she helped found last year and which has been described as “Britain’s first black-led political party”.

Activists from the TTIP on Tuesday criticised the Met’s statement. In their own statement, released first through Instagram and subsequently through the party’s website, they objected to the characterisation of the attack on Johnson.

“Whilst we are overwhelmed by the love and the support for Sasha, we are also deeply saddened and disgusted by the negative press that has infested from this act of hate,” the statement said, adding that the party had been receiving hate mail celebrating Johnson’s shooting.

“The irony is in the fact that the police have stated that there is no clear evidence that Sasha was the target of the attack, and that there are no credible death threats made towards her; however, how have the police come to this conclusion without being able to speak with Sasha regarding the death threats and investigate?

“Do the police know who the target of the attack was, in order to conclude that Sasha wasn’t? How does one manage to shoot someone in the head accidentally? Surely, to end up in hospital having sustained a bullet shot to the head, makes a death threat more credible …

“We are disgusted by the way that this narrative has been portrayed as a ‘black-on-black crime’ and a ‘gang crime’, not acknowledging that this is a hate crime or a targeted attack at worst.”

Sources in the black civil rights activist movement have said previously that Johnson had faced a number of threats, including having her car windows smashed. These threats had motivated her recently to move from Oxford to London, the Guardian understands.

The TTIP statement said Johnson was in critical care recovering from surgery to treat her injuries. Charles Gordon, another founding member of TTIP, said: “We are deeply concerned about the attack on our sister. She is a pillar of our community. We have had calls from various activists and leaders within the community, worried about whether the next attack could be on them.”

Posted by The Guardian