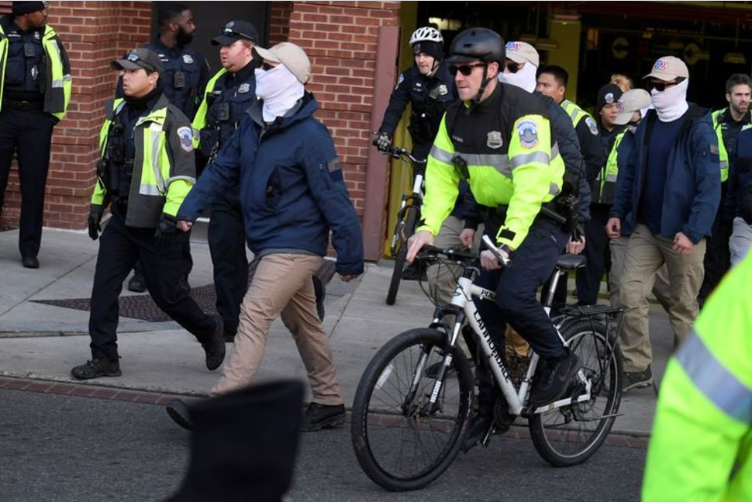 WASHINGTON (REUTERS) – Police escorted masked members of a white nationalist group on a march through Washington’s National Mall on Saturday that Metropolitan Police said occurred without incident or arrests.

The Southern Poverty Law Center describes the Patriot Front as a white nationalist group that broke off from a similar organization, Vanguard America, in the aftermath of the deadly “Unite the Right” rally in Charlottesville, Virginia in 2017.

At that rally, self-described neo Nazi James Fields drove his car into a group of counter-protesters, killing 32-year-old Heather Heyer. He was convicted of first-degree murder and sentenced to life in prison in 2018.

U.S. President Donald Trump drew criticism from his fellow Republicans as well as Democrats for saying that “both sides” were to blame for the deadly 2017 incident.

Video of Saturday’s march in Washington posted on the News2Share Facebook page showed occasional hecklers, but there appeared to be no organized counter-protest movement waiting for the Patriot Front as the group marched from the Lincoln Memorial to the U.S. Capitol grounds and later a nearby Wal-Mart parking garage.

They were accompanied by dozens of police, some on bicycles, but it was unclear whether the group had obtained a permit for the march. A spokeswoman for District of Columbia Metropolitan Police said it had no record of a permit for the march. Capitol Police and the National Park Service could not immediately be reached for comment.

The Metropolitan Police spokeswoman said that the “First Amendment demonstration was peaceful with no incidents or arrests.”

Dark Melanin Could Be Your Defense against CoronaVirus; It’s True and False, Maybe.