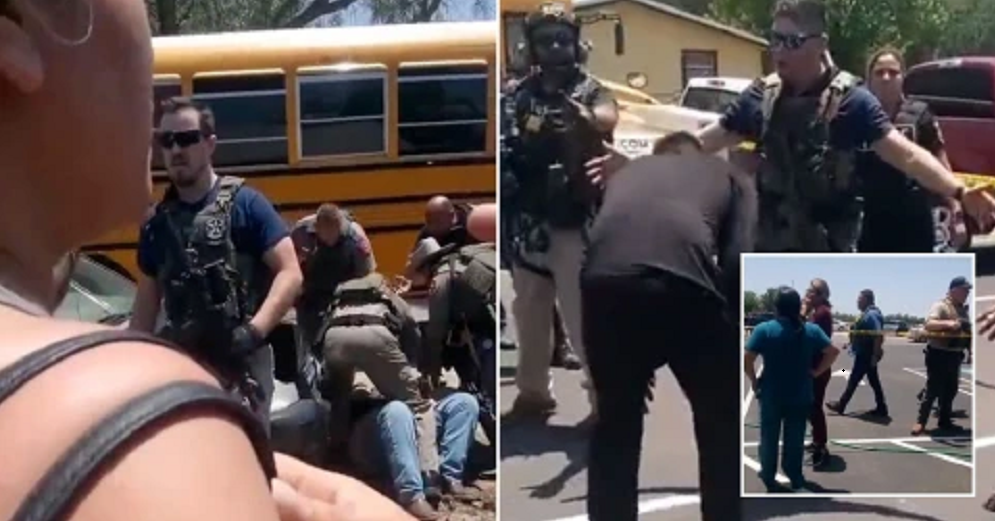 A video circulating on social media appeared to show officers stopping anguished parents from rushing into the elementary school where a gunman’s rampage left 19 children and two teachers dead.

The footage, captured by Hugo Cervantes, showed numerous parents confronting the heavily armed officers who set up a perimeter around Robb Elementary School in Uvalde, Texas, on Tuesday.

Inside, authorities said 18-year-old Salvador Ramos had barricaded himself inside a fourth-grade classroom and started shooting.

In a news conference on Wednesday, officials said Ramos was inside the school for at least 40 minutes before a Border Patrol team breached the classroom and killed him.

The video shared online captured the growing frustration of parents and family members who were seen yelling and screaming at the heavily armed officers standing outside the building, demanding they do more.

The footage also showed several officers pinning down a man near a school bus.

“What the f**k you doing to him? Let him up!” someone is heard shouting.

One officer keeping people at bay is seen holding a Taser in the clip, as parents called on officers to charge into the school.

Juan Carranza, who lives across the street from the school, said that he saw people urging police to go into the school.

A woman had shouted “Go in there! Go in there!” shortly after the shooting began, Carranza said, but police remained outside.

Javier Cazares, whose daughter Jacklyn Cazares was killed, said that police were “unprepared.”

Cazares had raced to the school when he heard about the shooting and arrived to find police were still gathered outside. He grew frustrated that they were not moving and suggested charging into the school with other bystanders.

“More could have been done,” he said.

Ramos shot and wounded his grandmother at home before attacking the school, authorities said.

He reportedly crashed his truck into a ditch outside the school before grabbing his AR-15-style semi-automatic rifle and fired at two people outside a funeral home nearby.

Officials say he “encountered” a school district security officer outside the school but it’s not clear whether they exchanged gunfire.

They said Ramos fired on two arriving Uvalde police officers who were outside the building. Both officers were injured.

Steve McCraw, Director of the Texas Department of Public Safety, defended the actions of law enforcement.

He said 40 minutes to an hour elapsed from when Ramos opened fire on the school security officer to when he was shot dead but a department spokesman later said they could not give a solid estimate of how long the gunman was in the school.

“The bottom line is law enforcement was there,” McCraw said. “They did engage immediately. They did contain [Ramos] in the classroom.”