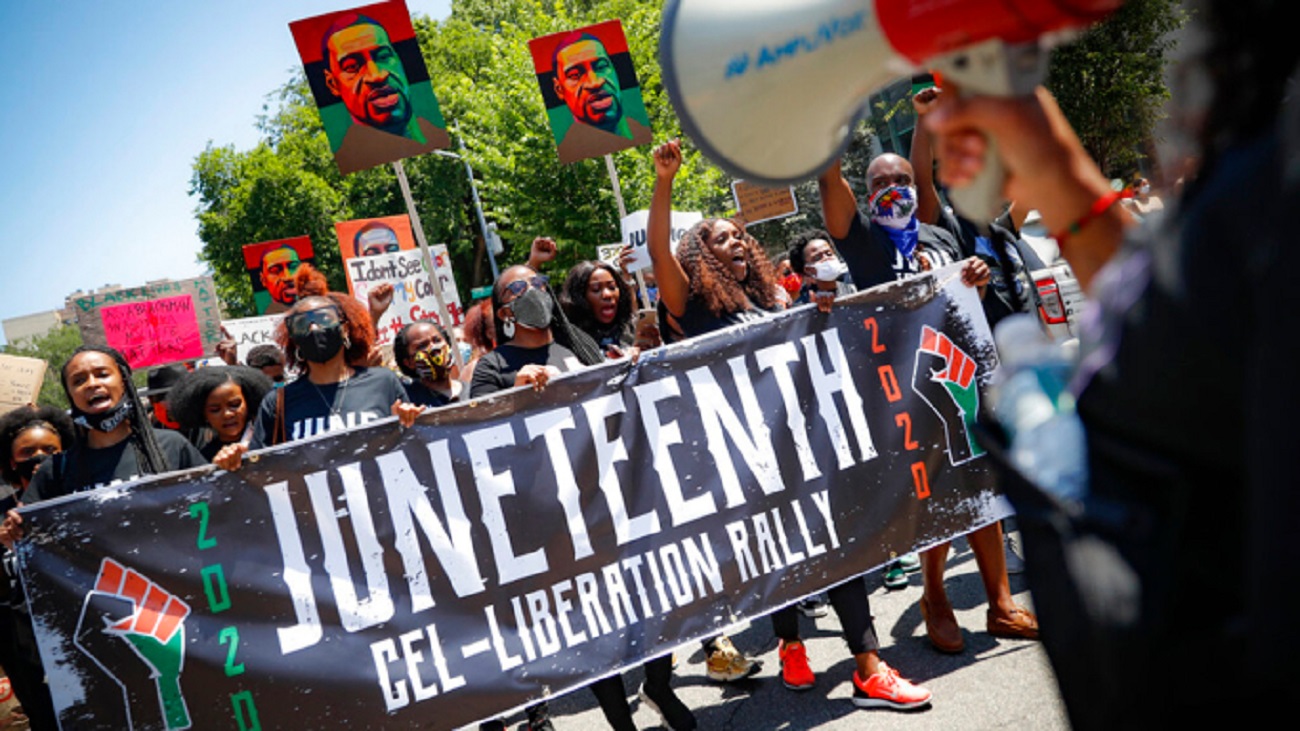 FILE- In this June 19, 2020 file photo, protesters chant as they march after a Juneteenth rally at the Brooklyn Museum, Friday, June 19, 2020, in the Brooklyn borough of New York. On Thursday, July 23, 2020, New York State passed a bill to designate June 19 as Juneteenth to commemorate the emancipation of slaves in the U.S. (AP Photo/John Minchillo, File)

The Senate passed a bill Tuesday that would make Juneteenth, or June 19th, a federal holiday commemorating the end of slavery in the United States.

The bill would lead to Juneteenth becoming the 12th federal holiday. It is expected to easily pass the House, which would send it to President Joe Biden for his signature.

Juneteenth commemorates when the last enslaved African Americans learned they were free. Confederate soldiers surrendered in April 1865, but word didn’t reach the last enslaved Black people until June 19, when Union soldiers brought the news of freedom to Galveston, Texas. That was also about two years after the Emancipation Proclamation.

“Making Juneteenth a federal holiday is a major step forward to recognize the wrongs of the past,” said Senate Majority Leader Chuck Schumer, D-N.Y. “But we must continue to work to ensure equal justice and fulfill the promise of the Emancipation Proclamation and our Constitution.”

The Senate passed the bill under a unanimous consent agreement that expedites the process for considering legislation. It takes just one senator’s objection to block such agreements.

Sen. Ron Johnson, R-Wis., had objected in the previous Congress to a bill to celebrate Juneteenth as a federal holiday because of the cost and lack of debate, he said. Johnson noted that he has supported resolutions recognizing the significance of Juneteenth, but he was concerned the new holiday would give federal employees another day off at a cost of about $600 million per year.

“While it still seems strange that having taxpayers provide federal employees paid time off is now required to celebrate the end of slavery, it is clear that there is no appetite in Congress to further discuss the matter. Therefore, I do not intend to object,” Johnson said in a statement before Tuesday’s vote.

The bill is sponsored by Sen. Edward Markey, D-Mass., and had 60 co-sponsors. He tweeted Monday: “We have a long road towards racial justice in the United States and we cannot get there without acknowledging our nation’s original sin of slavery. It is long past time to make Juneteenth a federal holiday.”

The vast majority of states recognize Juneteenth as a holiday or have an official observance of the day, and most states hold celebrations.

Under the legislation, the federal holiday would be known as Juneteenth National Independence Day.