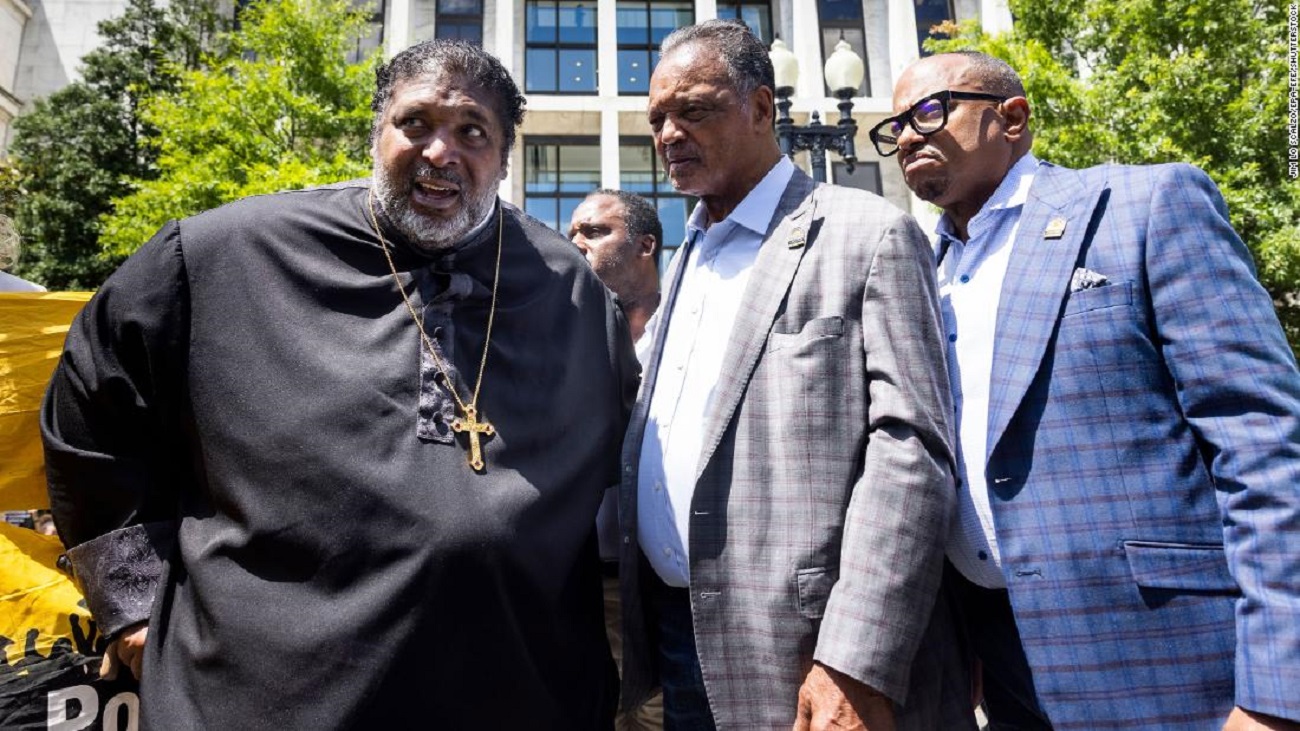 US Capitol Police said Jackson and Barber were among 21 people arrested on Wednesday near the US Supreme Court building for crowding and obstructing. Video footage shows the faith leaders were outside the Hart Senate Building at the time of their detention.

The faith leaders are part of several high-profile figures and organizations demanding that lawmakers at the state and federal halt efforts to enact bills that restrict voting access and support the For the People Act, a signature voting and election bill that Democrats had pitched to counter state-level efforts.Prior to their arrest, Barber held a rally in front of the US Supreme Court as part of the “Moral March on Manchin and McConnell.” The event organized by the faith-led grassroots organization The Poor People’s Campaign aimed to call on Senate Minority Leader Mitch McConnell and Democratic Sen. Joe Manchin of West Virginia to abolish the filibuster.Manchin has previously said he would not commit to voting to open debate on the For the People Act. On Tuesday, a procedural vote to open debate on the legislation was defeated by a tally of 50-50. The legislation needs the support of 60 senators to break the filibuster and open a debate.After speaking in front of the US Supreme Court, Barber and Jackson led demonstrators to the nearby Hart Senate Building, where they marched on the sidewalk. A video live-streamed by Repairers of the Breach, a group that Barber leads, shows that the faith leaders then stepped on the middle of the street, blocking traffic along with a smaller group of people who held a sign calling for Manchin to stop the filibuster. Minutes later, Capitol police officers began warning the group they were engaging in “illegal demonstration activities,” the video shows.

Video footage captured by CNN shows the group was later escorted to the sidewalk by officers.

This is not the first time Barber led a protest against the filibuster. Last week, Barber and dozens of people marched to Manchin’s office in West Virginia.

“They’re tired of Manchin supporting the filibuster and not supporting them. Talking about bipartisanship rather than talking about the needs of West Virginia,” Barber told CNN earlier this month about Manchin’s constituents.Civil rights groups are expected to continue their efforts in their fight against voter suppression. Earlier this week, a group of civil rights groups announced the August 28 “March On for Voting Rights,” which will mark the 58th anniversary of the historic March on Washington where Martin Luther King Jr. delivered his famous “I Have a Dream” speech.

Martin Luther King III, the eldest son of Martin Luther King Jr., will lead the march with his family’s organization the Drum Major Institute along with March On, Service Employees International Union and the National Action Network.

“It’s time for all Americans to come together and join this non-violent, non-partisan movement in the spirit of Dr. King and the values he pushed this nation to uphold,” said Rev. Al Sharpton, who heads the National Action Network. “I’m proud to be a part of the March On for Voting Rights because there is no democratic right more sacred than the right to vote, and it is under threat across America. We must fight to protect it.”