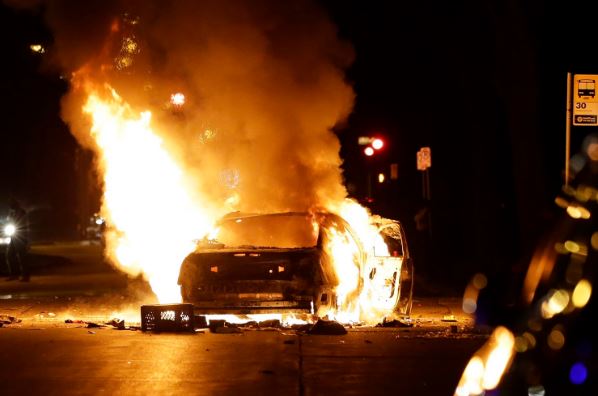 As yet another African American was shot and killed by police in Milwaukee, protests and fires erupted in the rust belt city.

According to police, the 23-year-old victim was armed with a semiautomatic handgun and was shot dead after fleeing a traffic stop in the city’s predominantly black north side Saturday afternoon. It is not clear if he ever pointed the gun at officers. Wisconsin is an open carry state.

Hours later, about 100 people took to the streets. NBC News reports that an officer was injured by a flying brick. The AP reports that at least four businesses were burned, including a gas station, and the crowd started smashing a squad car’s windows. Another police car was set on fire and gunshots were also reportedly fired.

Mayor Tom Barrett appeared with other city leaders after midnight calling for calm.

The victim of the shooting has not been identified, nor was the officer involved, though police did confirm that he is a 24-year-old man who has been with the department for three years. The officer has been placed on administrative leave.

Statistically “the most segregated city in America,” Milwaukee was listed as one of the worst places for African Americans to live by NPR last year because of vicious disparities in education, incarceration and housing.

The AP reports that in December, the Justice Department announced it would work with Milwaukee police on reforms following the fatal shooting of a mentally ill black man in a confrontation with a white officer in 2014 at a downtown park.

Statistician Samuel Sinyangwe tweets that though black men make up 18 percent of the city’s population, they are 90 percent of those killed by police.

Black men are 18% of Milwaukee’s population, but 90% of those killed by #Milwaukee police. #MilwaukeeUprising https://t.co/do38mvzknm

Read more at NBC News and the Associated Press.