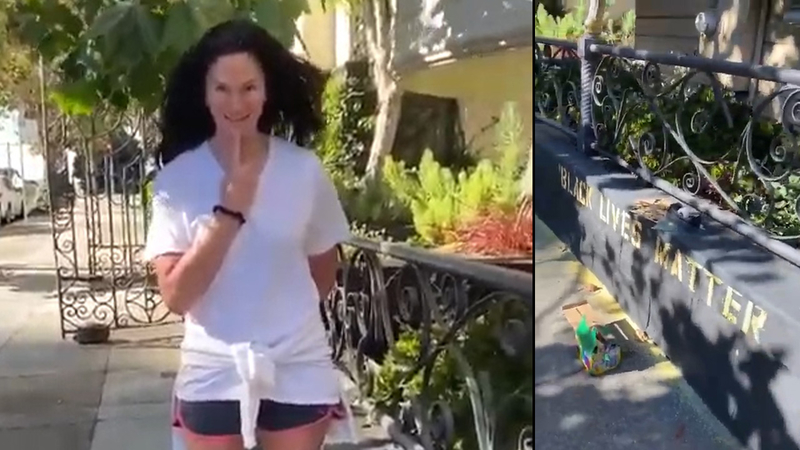 SAN FRANCISCO — A San Francisco man said a white couple called the police after they saw him stenciling “Black Lives Matter” onto a wall outside of his home.

James Juanillo, who identifies as a brown man, posted a video to Twitter Friday showing his encounter with the man and woman.

The video begins with the couple asking Juanillo if he was “defacing private property” moments after he finished writing the phrase on a retaining wall outside of his home.

Our sister station KGO-TV interviewed Juanillo, who said he clearly stenciled in chalk, which will wash away in the rain. “That leaves only the message to be problematic,” he said.

“If I did live here, and this was my property, this would be absolutely fine? And you don’t know if I live here, if this is my property?” Juanillo asked in the video.

A San Francisco man James Juanillo said a white couple called the police after they saw him stenciling “Black Lives Matter” in chalk onto his own property.

The woman then claimed that she knew Juanillo didn’t own the property because they “know the person who does live here.”

Juanillo encouraged them to call the police if they feel unsafe, which they eventually did.

“The police came and recognized me immediately as a resident of the house and left without getting out of their patrol car. I didn’t even show them my ID,” Juanillo told Storyful.

Brad Gilbertson, who is one of the owners of the property, said he doesn’t know the couple in the video.

“She just claimed she knew the owner of the house. She doesn’t know me. I thought she was out of line,” he said.

Juanillo said he hopes this video helps his community come together against racism.

“What she did is polite racism. It’s respectable racism. ‘Respectfully, sir, I don’t think you belong here,'” he said.

KGO-TV reached out to Alexander and is awaiting a response.