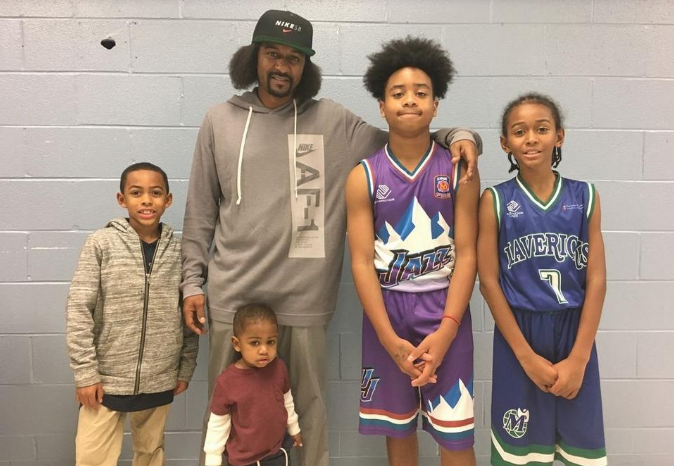 Justin Chappell grew up without a father. Much later in life, he did find his heavenly father and now helps other fatherless children to do the same.

Chappell is an Ennis resident who runs two businesses in Ellis County – Bama Landscaping in Ennis and Chappell’s Copieshop in Waxahachie. Chappell said he works tirelessly throughout the week for both of his businesses, but he runs the two to fund his real passion: Bloodz For Christ, a non-profit he founded in 2009 to support and minister inner-city youth in low-income communities.

He said the goal was to help the next generation through one-on-one mentorships and relationships some of them might not have had at home.

“I donate probably about 85 percent of whatever profit we make to my nonprofit to keep these kids off the streets,” Chappell said. “My business is pretty much the only thing funding my nonprofit.” ″

But years before he even thought of starting BOC, Chappell had a bleak past that was filled with drugs, gangs and jail bars. He said he was able to overcome it with God’s help, and he hopes to help show others how to do the same.

FROM ALABAMA TO TEXAS

Chappell was born Jan. 23, 1984 in Birmingham, AL. Chappell said he didn’t have a father, and he got into it with some of the wrong people, which included a few gangs.

“Alabama is real bad,” Chapell recalled. “My buddy got kidnapped. They killed him. I was honestly scared.”

Chappell got away from Alabama and moved to Corsicana, where he received a scholarship to play basketball at Navarro College. He later transferred to the University of Texas at Arlington before suffering a career-ending injury.

Chappell said he got depressed. So, he attempted to fill the void through unconventional means.

“In Texas, drugs are cheap,” Chappell said. “So I started trafficking, living that lifestyle. Not having any other avenue as a black man, the easiest thing for us to do is to sell drugs. It’s right there. We can all do it, and you got people to train you.”

Chappell said his mother kept discouraging him from drug trafficking and kept pressing him to go to church. He didn’t listen, and he paid the price much later when he was arrested for drug possession.

“It was my rock-bottom,” he recalled. “I remember praying to God, and it was like ‘God, if you get me out of here, I will go to that church my momma has been telling me about. I promise.’ I just kept begging him.”

That same week, his stepfather won a lawsuit he had been fighting for about a decade. Chappell’s freedom was bought and paid for. He was 22.

Chappell said he messed up big time, but God was watching him and leading him on the right path.

“It was like a reality check,” Chappell said. “I cried, and I thanked him for giving me the opportunity. He could have sent me to prison.”

LIFE OUT FROM BEHIND BARS

Chappell started going to church, just like he promised. He said as he went, his whole outlook on life began to change.

“I started seeing a lot different,” Chappell said. “I changed my whole philosophy. God had a purpose for me, and I had to serve it.”

But life was difficult to adjust to after Chappell left the county jail. He said he was on probation, and people didn’t want to hire him given his criminal record.

He said he couldn’t find a job because of his circumstances.

Around that time, he explained, a close friend had just been released from prison after being locked up for the better part of 10 years.

When they were discussing what they could do, he asked his friend what he was good at. He said, “cutting grass.”

That was when Chappell had the idea of starting a small landscaping company, ultimately deciding to call it “Bama’s Landscaping” after his sweet home Alabama.

“I was doing this broke, making $500 every two weeks, a single father with a one-year-old and a three-year-old,” Chappell said. “It’s sad, but it’s motivation. I was still doing this.”

One thing Chappell realized quickly was how difficult it was for many former prisoners to find employment after release. To help others and his business, he offered jobs to former inmates once they served their sentence.

Chappell has since purchased six trucks and partners with the Ellis and Navarro County probation departments to find new workers.

“I open it up,” he said. “Guys that normally can’t find jobs, I’ll hook them up with a job and give them a truck. Then they’ll pretty much create their own business.”

“The business kind of took off on me,” he chuckled.

Whenever he was working, Chappell said he felt like he needed to do more for his community. He said he saw many kids in the same dangerous situations as he once was.

So in 2009, he founded BOC to instill the values in the next generation that he never learned himself. The organization partners up with the Boys and Girls Club in Ennis and supports more than 100 boys from Waxahachie, Ennis, Desoto and Dallas.

“Black males with no father, it’s like a cycle,” he expressed. “And I know the only way to break the cycle because I’m supposed to be a statistic. You mold them. You teach them. You show them how to make it.”

Chappell said he started the program with six kids. Three of them are now preachers. The other three, he said, have all been to prison, but he plans to help them whenever they get out by saving a job for them at Bama’s.

“I go to poverty-stricken areas, and I lay my smack-down,” he stated. “I gather as many kids as I can get, and they just come to me like a magnet. I’m like a celebrity when it comes to kids.”

Chappell said the BOC has several activities that the kids can participate in. He said the kids could be part of a Mime Club and join in dance-offs, can compete in a chess club and make their own music from Chappell’s recording equipment.

Plus, Chappell trains their youth basketball team on Sundays at the Boys and Girls Club in Ennis.

But the extraordinary moments for Chappell involve the BOC’s outreach efforts to the community. He recalled one memory when a woman was diagnosed with cancer eight years ago, and the BOC went to the hospital to pray with her. Two weeks later, she visited one of the BOC’s dance-offs at their church and expressed her gratitude to them, saying that her own grandkids don’t see her as much as the BOC kids did.

She died two weeks later. Chappell said he was grateful that she got to spend some of her final moments with the BOC.

Recently, Bama’s Landscaping won a customer video contest with Mulligan Funding, a privately owned family business in California that issues loans to small and medium-sized companies. The prize was a 60-second professional video animation produced by Mulligan Funding to be used for promotional purposes at the business’ discretion.

However, instead of the promotion, Chappell asked Mulligan if they would instead donate the money to the BOC. Chappell said Mulligan complied and gave $1,500 to the BOC, which Chappell said would last the non-profit about three months.

Chappell said he’s happy and grateful for the opportunities he’s been given to help guide these kids toward their futures.

“I’m doing something positive and feeling blessed from it,” he expressed. “We’re saving lives, man.”

If you would like to donate or learn more about the BOC, call 214-554-8358 or email bloodzofchrist@yahoo.com.