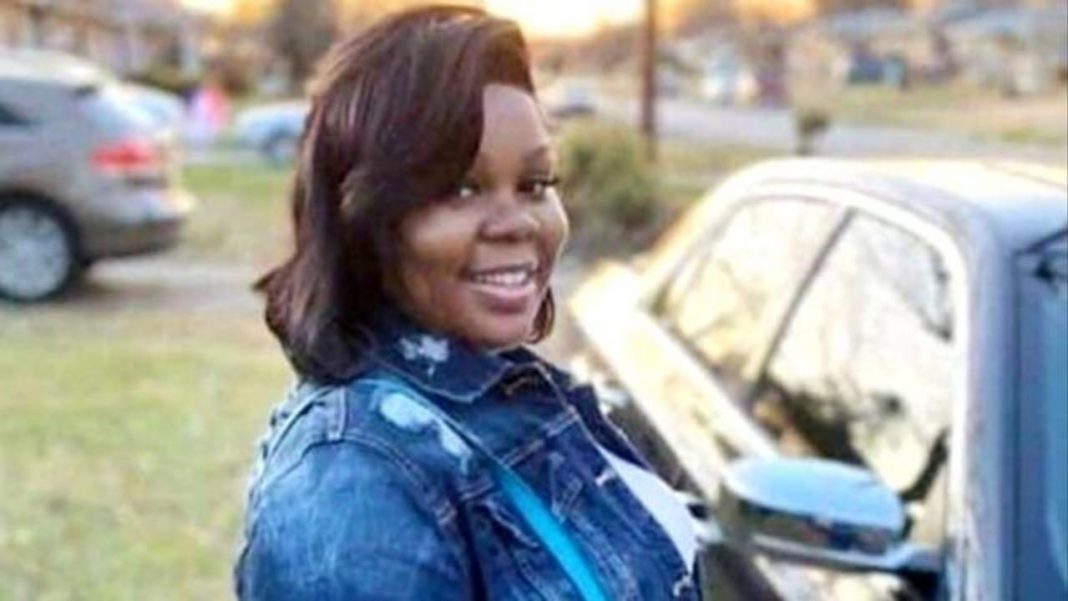 The Justice Department on Thursday filed federal charges against four current and former Louisville police officers connected to the 2020 death of Breonna Taylor, who was shot and killed by police in a raid on her apartment while she was sleeping.

The charges against defendants Joshua Jaynes, Kyle Meany, Kelly Goodlett and Brett Hankison include various civil rights violations, conspiracy, use of force offenses and obstruction. Attorney General Merrick Garland said the civil rights charges against three of the officers stem from alleged falsification of the affidavit used to obtain the search warrant that authorized the early morning raid on Taylor’s apartment.

“The federal charges announced today allege that members of the place-based investigations unit falsified the affidavit used to obtain the search warrant of Ms. Taylor’s home, that this act violated federal civil rights laws and that those violations resulted in Ms. Taylor’s death,” Garland said at the Justice Department.

Taylor, a 26-year-old EMT, was shot on March 13, 2020, when officers from the Louisville Metro Police Department (LMPD) stormed into her apartment where she was asleep with her boyfriend, Kenneth Walker. Walker thought the officers were intruders and fired his handgun at them as they were entering, striking one in the leg. The officers fired 22 shots into the apartment in response, one of which struck Taylor in the chest, killing her.

The LMPD fired Hankinson and Jaynes in the months after the Taylor’s death, and the department said Thursday that the police chief had begun “termination procedures” for Meany and Goodlett, who are still on the force.

In charging documents, prosecutors said Goodlett and Jaynes, both detectives, included false and misleading information in an application for the search warrant, specifically that a postal inspector had informed Goodlett that the target of their drug trafficking investigation was receiving packages at Taylor’s address. That was false, prosecutors allege, but Meany, a sergeant and their supervisor, approved the warrant application anyway.

“We allege that the defendants knew their actions in falsifying the affidavit could create a dangerous situation, and we allege these unlawful acts resulted in Ms. Taylor’s death,” Garland said, noting that none of the officers who executed the warrant “were not involved in the drafting of the warrant and were unaware of the false and misleading statements it contained.”

The attorney general said Jaynes, Goodlett and Meany also “took steps to cover up their unlawful conduct after Ms. Taylor’s death” and “conspired to mislead federal, state and local authorities who were investigating the incident.”

Jaynes and Goodlett allegedly met in Jaynes’ garage on the night of May 17, 2020, after seeing media reports that a postal inspector had contradicted the information in the search warrant application. The pair devised a scheme to tell investigators a false story about the affidavit, according to charging documents. They both told similar stories about a postal inspector casually mentioning the target was receiving packages at Taylor’s address, a claim they knew was false, prosecutors said.

Meany is also accused of lying to investigators about the officers’ unannounced entry into Taylor’s home. According to charging documents, Meany told the FBI that his officers executed the warrant at the request of the SWAT unit, when in fact he knew that the unit did not put in such a request.

In a separate indictment, Hankison was charged with two counts of deprivation of rights for firing 10 rounds through a window and glass door in Taylor’s apartment after she was killed. Hankison was acquitted on state charges of wanton endangerment at trial earlier this year.

The charges come more than a year after the Justice Department opened a civil rights investigation into the patterns and practices of the Louisville Metropolitan Police Department, a probe that is separate and ongoing, a release from the department noted.