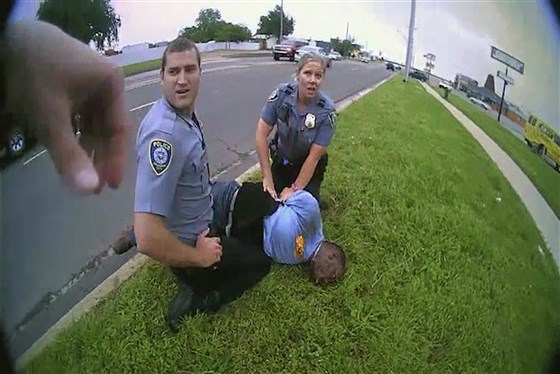 Newly released body camera footage from an arrest in Oklahoma City last year shows a suspect saying “I can’t breathe” before he died at a hospital.

In the May 20, 2019 footage, released this week by the Oklahoma City Police Department, three officers are seen restraining the man, Derrick Scott, 42, who can be heard asking repeatedly for his medicine and saying that he can’t breathe.

“I don’t care,” one of the officers, Jarred Tipton, can be heard replying at one point. “You can breathe just fine,” another officer can be heard saying a couple of minutes later.

Scott, who appears unresponsive several minutes into the footage, was later pronounced dead at a local hospital. An autopsy obtained by NBC News lists his cause of death as a collapsed lung.

The incident began after officers were called to an area south of downtown Oklahoma City shortly before 2 p.m. after someone reported that a black man was arguing with people and brandishing a gun, Oklahoma City police Capt. Larry Withrow said in a statement.

The footage shows Scott running from officers after Tipton asks if he has any weapons. After the police tackle and restrain him, one of the officers can be seen removing a handgun from Scott’s pocket.

Later, an officer tries to administer CPR before paramedics arrive.

The autopsy said the police response did not result in “fatal trauma” and listed several other “significant” factors that contributed to his death, including physical restraint, recent methamphetamine use, asthma, emphysema and heart disease.

His manner of death was listed as “undetermined.”

In this article:Derrick Scott, Oklahoma