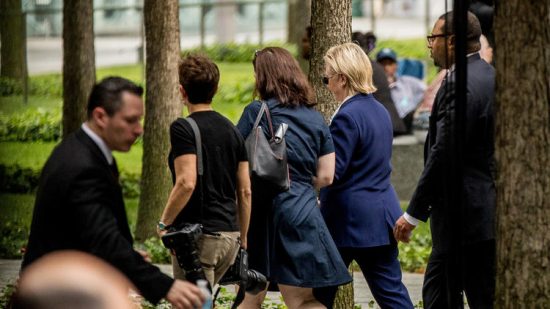 Hillary Clinton’s abrupt departure from a Sept. 11 ceremony in New York after falling ill Sunday and the subsequent disclosure that she is suffering from pneumonia are likely to intensify scrutiny on the Democratic nominee’s health and potentially inject a new campaign issue into a race between two of the oldest candidates ever to seek the White House.

Clinton supporters had long dismissed concerns about her health as baseless, insisting that she only suffered from allergies. But Sunday’s incident — along with a video appearing to show Clinton having difficulty standing on her own — will only amplify such questions just as the race enters its final weeks.

The incident also could increase pressure on Clinton, 68, and Republican nominee Donald Trump, 70, to release more information about their health. Clinton has disclosed less than some previous candidates. Donald Trump has released almost nothing.

“This is the kind of thing that voters have a right to understand before they cast a vote,” said Katie Packer, a GOP strategist who says she does not support either Trump or Clinton.

“Both Trump and Hillary are elderly. They are obligated to release full medical records and full tax returns to the American people. And the media, party leaders and American people should settle for nothing less.”

The pneumonia diagnosis comes as the campaign enters its most grueling phase, weeks before the first presidential debate and as voters start heading to the polls in states with early voting. Her doctor, who made the diagnosis Friday, has advised Clinton to curtail her schedule. But the Democratic candidate did not appear to skip any planned events over the weekend, including a fundraiser in New York headlined by Barbra Streisand.

After the incident, Clinton’s campaign said late Sunday it was canceling a planned trip to California on Monday and Tuesday for fundraisers and a taping of “The Ellen DeGeneres Show.”

Clinton’s lung infection comes after a tough week for her campaign, with polls showing a tightening of the race against Trump. Then over the weekend, Clinton was forced to partially walk back comments she made referring to half of Trump’s supporters as “deplorables.”

The new scrutiny of her health will add to these problems.

“Forty-eight hours ago, this was something for the Flat Earth Society and the birth certificate deniers,” Dan Schnur, director of USC’s Jesse M. Unruh Institute of Politics, said of the speculation about Clinton’s health. “Now it’s a topic of legitimate, mainstream political discussion.”

Although Clinton’s opponents will surely make an issue of her having pneumonia, her campaign’s relatively quick release of the diagnosis marked a significant step toward transparency for a candidate who has often shied away from disclosing information she considers private.