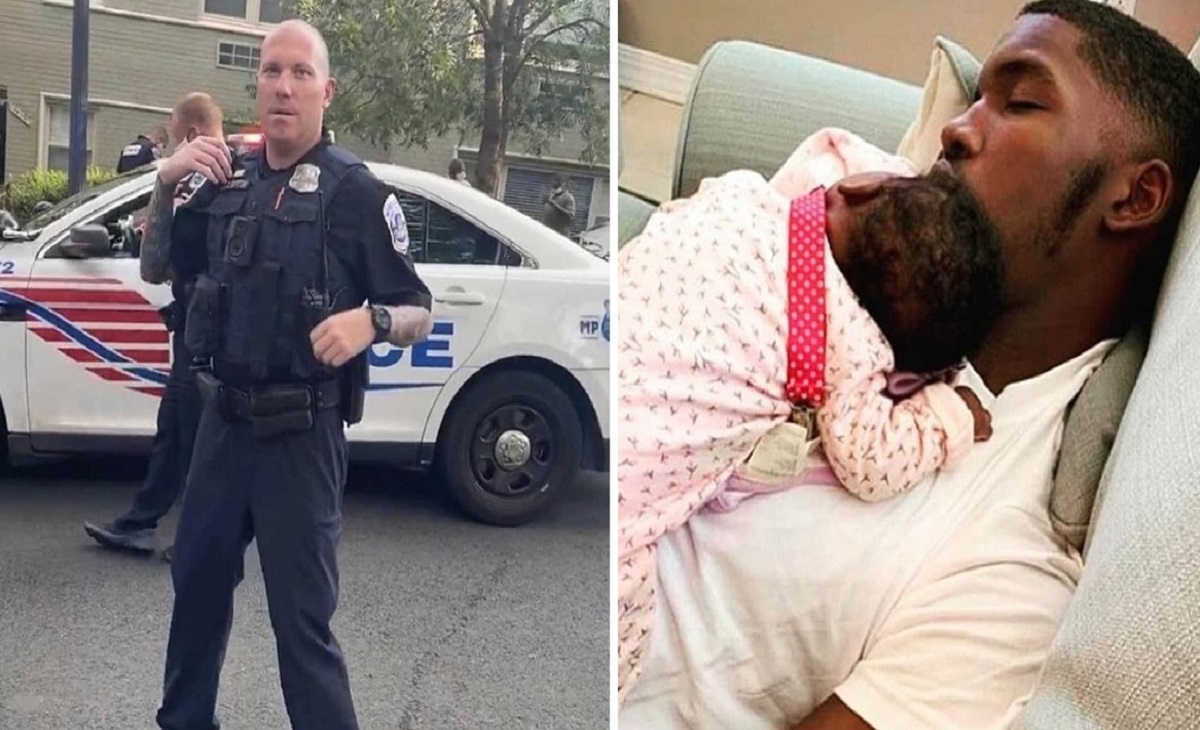 DC Metro Police officer alleged he saw Hylton riding on a sidewalk on an electric moped with no helmet on. The officers claimed they activated their lights and sirens, and Hylton ducked into an alley. Police said that when he rode out of the alley about a block down, he collided with a passenger vehicle on the street. Officers said they rendered first aid before Hylton was taken to a hospital, where he later died.

Some of Hylton’s friends say they’re just not buying the police story.

“They hit him in the back of his scooter and pushed him into the oncoming car,” one friend said, According to CBS

Karon Hylton was the Father of a 3-Month-Old Daughter

Social media posted a photo of DC Metro Police Officer who they alleged chased Karon Hylton to his death over a helmet. The community says Officer Sutton has a history of terrorizing the community.

D.C. ACLU is suing DC Metro PD officers including Terrance Sutton for what it describes as a sexually abusive and unconstitutional search of a Black man in 2019.

According the DCist, The D.C. American Civil Liberties Union is suing a Metropolitan Police Department officer and the District for what it describes as a sexually abusive and unconstitutional search of a District man last January.

The complaint, filed Monday, details an incident on the evening of January 15, 2019, when MPD officers broke down the door of a Petworth apartment with a warrant to search for drugs and paraphernalia on the property—the suit alleges that the warrant did not include the right to search individuals.

All seven people in the apartment, who were there watching sports, were ordered to lie face-down on the ground, according to the suit.

Here’s what the ACLU alleges happened next: Plaintiff Mbalaminwe Mwimanzi was pulled to his feet and searched by an officer who found nothing illegal on him. Officer Terence Sutton pulled Mwimanzi by the shirt and allegedly told him,” You don’t run shit in here,” and said he had a “bad attitude.” Sutton then asked another officer to search Mwimanzi again.

After the first two searches, the suit claims that another officer, defendant Officer Joshua Wilson, told Mwimanzi to spread his legs. Mwimanzi says Wilson forcefully pressed his hand against Mwimanzi’s buttocks and jammed his genitals into his leg, despite Mwimanzi screaming out in pain.

Ultimately, the officers did not seize anything during that January search, per the lawsuit.

After Mwimanzi complained of severe pain in his anus and groin, he was taken to Medstar Washington Hospital Center to receive treatment for his injuries, the lawsuit says.