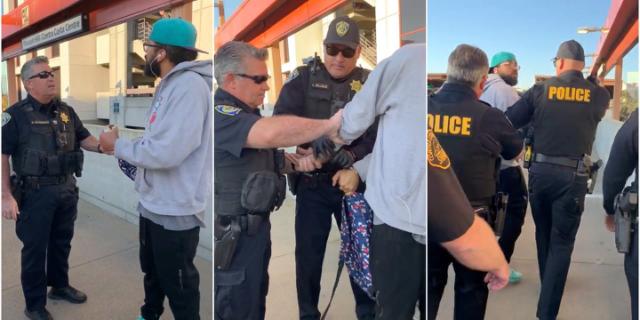 Police detained and cited a black man in California after an officer stopped him on a Bay Area Rapid Transit platform because he was eating a sandwich.

BART police said that Steve Foster, of Concord, broke state law by eating on the platform at the Pleasant Hill Station in Walnut Creek on November 4, KTVU reported.

His detainment prompted eat-in protests across the BART system on Saturday, where passengers filmed themselves eating on platforms to support Foster, according to ABC7.

Foster, who goes by the name Bill Gluckman on Facebook, posted footage of the incident that his girlfriend filmed.

In the clip, a BART police officer, identified as D. McCormick, can be seen holding on to Foster’s backpack before calling for backup and escorting him off the platform. McCormick told Foster he was being detained for resisting arrest.

Foster’s girlfriend can be heard questioning the officer’s decision and telling him that signs in the area say food is prohibited on the BART trains, not on the platforms. Officers later told her that food was prohibited on all BART property, including platforms.

Foster told KTVU that he was frustrated by the incident.

“I’ve never had anything like that happen to me before. I’ve definitely had run-ins with the police before, but that was by far the pettiest,” Foster said, describing the detainment as “childish.”

‘I was singled out because I was black’