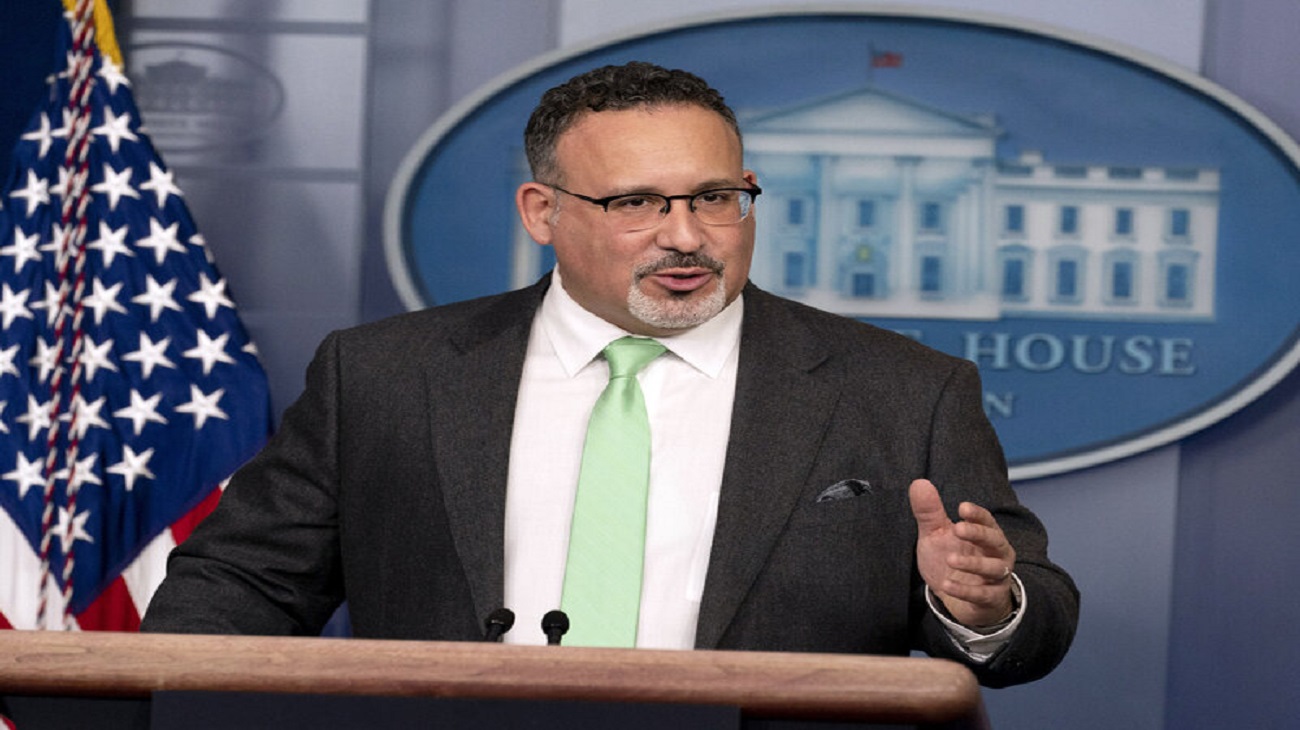 FILE - In this March 17, 2021, file photo, Education Secretary Miguel Cardona speaks during a press briefing at the White House in Washington. The U.S. Education Department on Wednesday, June 16, expanded its interpretation of federal sex protections to include transgender and gay students, a move that reverses Trump-era policy and stands against proposals in many states to bar transgender girls from school sports. In announcing the shift, Cardona said gay, lesbian and transgender students “have the same rights and deserve the same protections” as workers. (AP Photo/Andrew Harnik, File)

WASHINGTON— The U.S. Education Department on Wednesday expanded its interpretation of federal sex protections to include transgender and gay students, a move that reverses Trump-era policy and stands against proposals in many states to bar transgender girls from school sports.

In a new policy directive, the department said discrimination based on a student’s sexual orientation or gender identity will be treated as a violation of Title IX, the 1972 federal law that protects against sex discrimination in education.

The decision is based on last year’s landmark Supreme Court ruling protecting gay, lesbian and transgender people from discrimination in employment, according to agency officials. A legal analysis by the department concluded there is “no persuasive or well-founded basis” to treat education differently.

In announcing the shift, Education Secretary Miguel Cardona said gay, lesbian and transgender students “have the same rights and deserve the same protections” as workers.

“Today, the Department makes clear that all students — including LGBTQ+ students — deserve the opportunity to learn and thrive in schools that are free from discrimination,” Cardona said in a statement.

The policy is not likely to bring immediate, sweeping change but carries the possibility of federal sanctions against schools and colleges that fail to protect gay and transgender students.

With its new stance, the department is taking a stand against legislative proposals in a growing number of states that aim to forbid transgender girls from participating on female sports teams. Legislators in more than 20 states are considering such bans, and some others have already enacted them.

Although those bans appear to be a direct violation of the Education Department’s new policy, it’s not clear how the agency will respond. The new guidance does not explicitly address the question but says it will take action against if students are denied equal access to “academic or extracurricular opportunities” because of their sex.

The update drew outrage from conservatives who have pushed to keep transgender girls out of girls’ athletics. Christiana Holcomb, legal counsel for the Christian group Alliance Defending Freedom, called it a “politically motivated change” that effectively rewrites Title IX.

“Title IX exists precisely to ensure that women and girls have equal opportunities in education, including in sports,” Holcomb said. “Girls and women deserve better than having their opportunities stripped away in service of harmful ideology.”

Democrats and civil rights groups applauded the change, however, saying all students deserve equal protections. Rep. Bobby Scott, D-Va., chairman of the House Education and Labor Committee, said the department is right to extend the Supreme Court’s ruling to education.

“As a result of today’s action, LGBTQ students will have strong and clear legal protections from discrimination in schools, and a safe learning environment,” he said in a statement.

At the time, Education Secretary Betsy DeVos said the issue was “best solved at the state and local level” and that the earlier guidance led to a spike in lawsuits seeking clarification.

The new action does not reinstate the Obama-era policy but instead clarifies that the Education Department’s Office for Civil Rights will investigate complaints of discrimination involving gay or transgender students. If the department finds evidence of discrimination based on sexual orientation or gender identity, it will pursue a resolution to “address the specific compliance concerns or violations.”

The new guidance was issued as a “notice of interpretation” and does not carry the force of law. But the shift could be cemented in a policy overhaul that President Joe Biden ordered in March.

Biden’s order directed the Education Department to review all aspects of Title IX — including sweeping changes issued last year by DeVos — and “consider suspending, revising or rescinding” policies that fail to protect students.

The subject of transgender athletes led to a tense exchange during Cardona’s confirmation hearing when Sen. Rand Paul, R-Ky., said it’s wrong for transgender girls to compete in girls’ sports. Cardona pushed back at the March hearing, saying schools must “respect the rights of all students, including students who are transgender.”