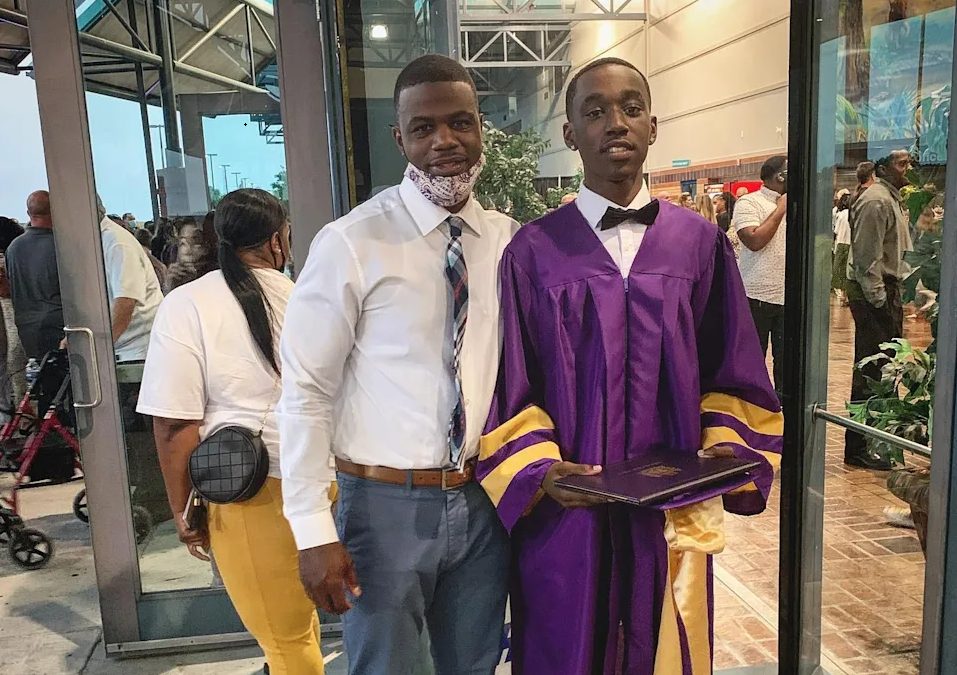 When Daverius Peters arrived at his high school graduation ceremony on May 19, he was immediately blocked from entering the convention center where it was being held.

Peters, 18, was wearing the mandatory purple cap and gown, but a school representative standing at the front door told him his shoe selection was wrong.

“She said my shoes violated the dress code and I couldn’t attend the ceremony unless I changed them,” said Peters, a senior at Hahnville High School in Boutte, La.

According to the school’s graduation dress code, male students were to wear dark dress shoes, with an emphasis that “no athletic shoes” were to be worn.

Peters showed up that day in black leather sneakers with white soles, and while they weren’t traditional dress shoes, “I thought I could wear them because they’re black,” he said, adding that he abided by the rest of the guidelines, which stipulated that students must wear a white dress shirt and tie, as well as dark dress pants.

When he was stopped from entering the front door, “I was in shock,” Peters recalled. “I felt humiliated. I just wanted to walk across the stage and get my diploma.”

He started to panic, he said, imagining what his parents would think if he wasn’t permitted to attend his own graduation. With only minutes until the ceremony was set to start, “I didn’t have time to stop at a store,” Peters said.

He paced nervously outside the convention center, until he suddenly spotted a familiar face: John Butler.

Butler, 38, is a paraeducator at the school and mentors many of the students – including Peters. He was attending the ceremony as a parent rather than as a staff member, since his daughter was graduating, too.

Peters ran over to Butler and explained the shoe situation.

“Of course, that sounded crazy to me,” said Butler, who has worked at the school for two years. “There was nothing eccentric about his shoes.”

He approached the woman who had barred Peters from entering, “hoping that maybe if she saw me with him, she would let it go,” Butler said. “But she insisted on not letting this young man in, and I didn’t have time to go back and forth with her.”

So, without hesitation, Butler bent down and did what he felt he had to do: He gave the student the shoes off his feet.

“It was a no-brainer,” he said. “This was the most important moment in his life up to that point, and I wasn’t going to let him miss it for anything.”

There was, however, one considerable problem: “He wears a size 9, and I wear a size 11.”

Ignoring the size discrepancy, Peters excitedly slid into Butler’s tan loafers and bolted inside for the ceremony, just as the doors were closing. Butler took his seat wearing only socks, proudly disregarding the glares from people confused by his lack of footwear.

“I was just happy to see him receive his diploma,” he said.

When his name was called, Peters shuffled across the stage in Butler’s oversize shoes.

“The shoes were so big; I couldn’t even walk. I was sliding,” Peters said.

The audience – especially Peters’s family – was perplexed by his footwear.

“Wait a minute, whose shoes does he have on?” Jima Smith, Peters’s mother, recalled whispering to her family. “We were all confused.”

They were also puzzled by Butler’s shoeless feet, though they didn’t connect the dots at the time.

“My other son said, ‘Look at that man with no shoes on,’ not knowing it was the man who gave his shoes to his baby brother so that he could walk across the stage,” said Smith, 48.

Immediately after the ceremony, Peters found Butler to return his loafers and thank him.

Peters was very grateful, he said, though “I wasn’t surprised because Mr. Butler is that type of person. At school, if you’re having a bad day, he’ll be the one to take you out of class, walk around the school with you and talk to you.”

Although everything worked out in the end and Peters was able to get his diploma, Butler said the story underscored the school’s critical need to adjust the dress code.

“Something that small shouldn’t rob a kid from experiencing this major moment,” said Butler, who is planning to meet with school administrators to review the guidelines for future graduation ceremonies. “It’s something that needs to be thoroughly discussed.”

Stevie Crovetto, the director of public information for Hahnville High School, said the school is taking the incident seriously.

“As with any policy that we have in place, any time an opportunity is presented to us to review and to make improvements, we absolutely will follow up on that,” she said. “We are not the least bit surprised that Mr. Butler did this kind gesture for this senior.”

When Peters’s parents learned what happened, “we were very upset,” Smith said, adding that her son has chronic asthma and spent the majority of the academic year in remote school. “He worked so hard, and for someone to just rip that away from him, that was maddening to me.”

Her son genuinely believed that his footwear fit the dress code, she said, but “how about if I couldn’t afford to buy him the shoes? This is not just about him; this is about the people that come after him.”

Smith intends to address the matter with the school board to ensure it doesn’t happen to another student in the future.

“If it wasn’t for Mr. Butler’s kind and thoughtful act, my child would have been sitting outside, and I wouldn’t have known,” Smith said. “I pray he will continue to work in the public school system because we need more teachers like him. Our young Black men need good role models and mentors like Mr. Butler.”

As for Butler, “I was just doing my part. I didn’t think much of it,” he said.

But the simple shoe swap left a profound impression on Peters and his family.

“He gave the shoes off his own feet to my child,” Smith said. “That says a lot about what type of man he is.”